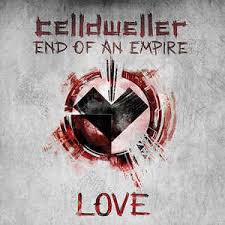 End of an Empire continues with the 2nd act in the prodigious third album from the hybrid electronic / rock artist Celldweller. Picking up right where ‘Chapter 01: Time’ left off, the “Love” chapter continues to build on the solely unique Celldweller fusion of compelling vocal melodies, destructive guitars, bewitching synthesis and atmospheres

After the opening “Faction,” (short pieces of sound design and story that serve as the backdrop for the world of End of an Empire), the album descends from it’s orbit with the 7 minute “Down to Earth” – a roller coaster ride that takes you from heavy guitars, blasting drums, gritty synthesizers and monstrous vocals to poignant leads, catchy rhythms and a touch of pop sensibility. “Heart On” lightens the mood with a tongue-in-cheek hook while still maintaining the signature Celldweller aggression for 6.5 minutes of a perfect yin and yang between dynamic and exciting instrumentation, propulsive beats and evocative vocals that echo the emotions one would expect from a chapter titled “Love.”

To further round out the release, Celldweller has again enlisted a selection of elite artists including alternative-culture mainstay Aesthetic Perfection, the YouTube production tutorial guru SeamlessR, EDM specialist KATFYR, along with the mysterious Mister Faux and a special VIP remix from Celldweller himself.

“End of an Empire is me, myself and I in my studio surrounded by lots of gear,” said Celldweller mastermind Klayton. “From the very first sound I lay down for a track to the final mastering, I’m in control over the final product.”

For “End of an Empire (Ch 02: Love),” Celldweller has tapped an onslaught of premier artists for remixes on the record, such as Aesthetic Perfection, SeamlessR, KATFYR, as well as a VIP mix by Klayton himself.

“On the production side, a large percentage of the synth/sound design has come from racks and racks of modular/analogue synths and outboard gear,” Klayton said. “Although, the process of using hardware can takes longer, I end up with results that I couldn’t get out of software and I’m also having a lot of fun doing it.”