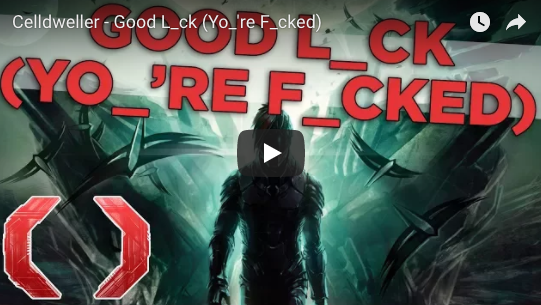 The wait for new Celldweller music is finally over — as long as you pre-ordered the forth-coming End of an Empire (Chapter 03: Dreams) that is!

Just like the last two chapters of Celldweller‘s latest musical saga, FiXT is rewarding pre-order customers with an early download of the high energy track “Good L_ck (Yo_’re F_cked) to give people a taste of what’s in store for them on March 13th, 2015 when the new chapter releases with another emotional cinematic vocal track, 3 more Factions (conceptual / instrumental sound pieces inspired by the main vocal tracks on the album) and 4 remixes from Combichrist, Hecq, Tom Player and Mobthrow.

As an extra bonus, Klayton shed some light on the inspiration & creation of “Good L_ck, Yo_’re F_cked” –

Chapter 03 has probably been the most fun I’ve had making the album so far. The biggest reason being I wrote “Good L_ck (Yo_’re F_cked) as someone else. What does that exactly mean? Friend and colleague Grant Mohrman and I have been working on a movie script. The story revolves around an individual who fronts an electronic punk rock band. Although that aspect of the story no longer exists, I wrote this song before we scrapped that idea. I was envisioning a song that would open the entire movie, including lyrics that applied to the premise of the film. It’s rare for me to write and entire song in a day, but that’s what happened with G.L.Y.F. – because I took a moment to shed the concept of being Celldweller and instead wrote from the perspective of someone else. Then I reproduced the song from the ground up and it became a Celldweller track that naturally fits alongside everything else in the End of an Empire universe.

You can pre-order your copy of Celldweller – End of an Empire (Chapter 03: Dreams) in the FiXT Store (including the hand-numbered, limited edition 2-Disc CD) or iTunes and get YOUR early download of “Good L_ck (Yo_’re F_cked) today!

And hey – if you like the track, why not check out the special “Good L_ck (Yo_’re F_cked) t-shirt!