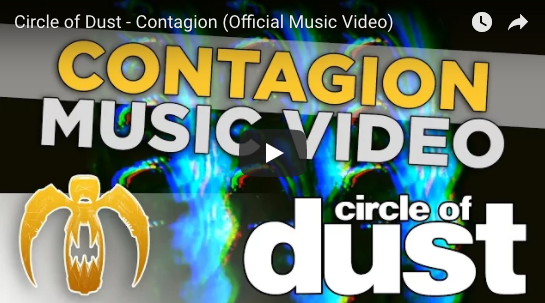 Last week saw the official resurrection of Circle of Dust, along with the premiere of the brand new Blue Stahli remix of “Nothing Sacred”.

This week – Circle of Dust continues to turn up the head with the official music video to his infectious 2016 debut – “Contagion”!

Eager to try a new approach to music video direction, Klayton (Circle of Dust, Celldweller) enlisted the reality distorting video app Hyperspektiv (developed by Phantom Force, comprised of three core members including The Glitch Mob‘s Justin Boretta) to create the first ever music video shot and processed in the app. And yes – you read that right. The entire music video was created using a $2 iPhone app. Take a look at the results below!

For the creative lot in the bunch, Circle of Dust also announced the “Spread the Contagion” campaign, encouraging fans to download the song for free and then grab Hyperspektiv in order to shoot their own short music video for “Contagion” for a chance to be featured in an upcoming Circle of Dust fan-video!