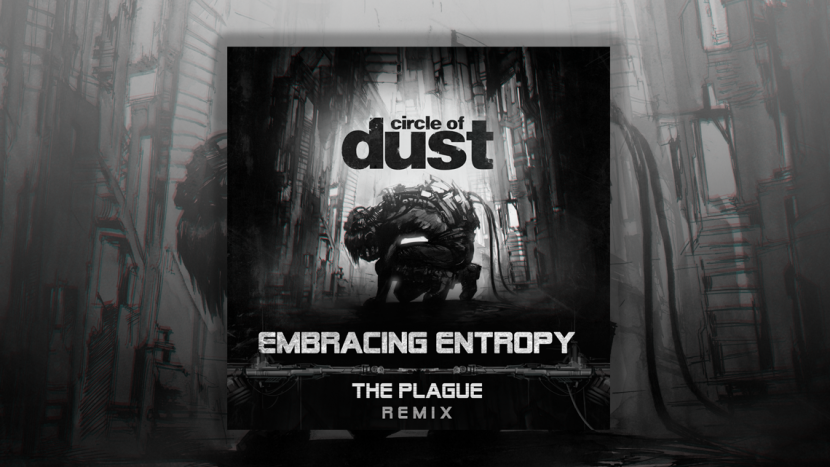 “…a hard rocking track that gets aggressive in parts, while delivering moody and hypnotic moments elsewhere.” – LoudWire.com

New York rock band The Plague deliver an intense remix of Circle of Dust’s “Embracing Entropy” (feat. Celldweller), as frontman and writer/producer David Adam Monroe re-vamps the entire track, more akin to a cover than a remix. Re-recording and re-producing all the primary instruments, from guitars and bass to drums and synths, the track transforms from an electronic opus to an aggressive onslaught.

The remix marks a milestone for The Plague as David Adam Monroe found inspiration from Celldweller while creating the Plague’s debut album Hope for the F.U.T.U.R.E. In a 2017 interview with 100 Percent Rock, David was asked to name one collaborator to do a song with, to which he replied “If I had to choose, Celldweller. He does a lot of production like me where he plays all the instruments and writes and records and mixes. His ability to fuze guitars and synths is uncanny and I love it.” While not technically a collaboration, The Plague’s remix of “Embracing Entropy” might just be the next best thing.

“When I got asked to do this remix, I was blown away. Celldweller and FiXT were a huge influence on me making ‘The Plague’ record, so it was incredible honor to work on this Circle of Dust remix.  I loved a lot of the drum phrases in the original so I tried to preserve some of them, and of course slap on some fuzz guitars!” – The Plague