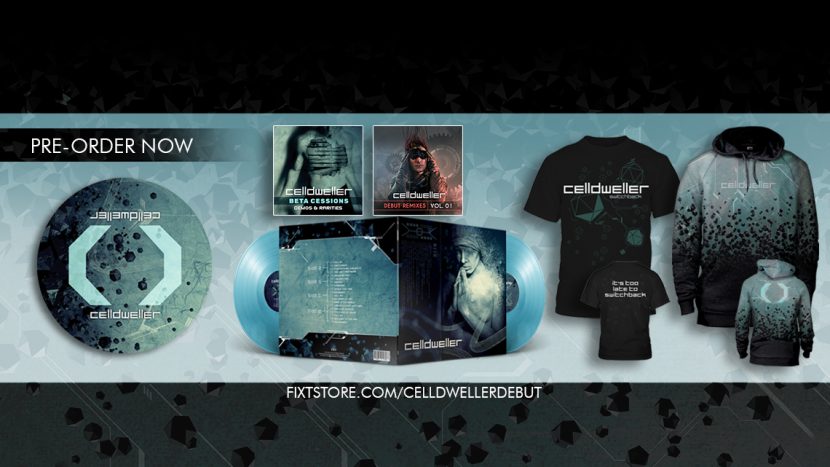 The self-titled, debut Celldweller album, released independently in 2003, has achieved a number of accolades and awards, from Billboard charting to industry recognized song/producer of the year awards, millions of streams/downloads, to licensing every song from the album to a major Film/TV/Video Game projects. Most importantly though, the album deeply connected with a global audience and turned listeners into life-long fans.

With deep gratitude to the entire worldwide fanbase, FiXT is proud to announce, for the first time ever, the debut album available on limited edition, 180 gram, electric-blue 2-LP vinyl. The packaging features a gorgeous spread of large format artwork, including a 12″ booklet with 12 pages of art & lyrics to the full album. Whether you listen to the album on your record player or simply collect the vinyl edition as an art piece, it’s the most stunning visual representation of the album ever released.

In addition to the debut Celldweller album coming to vinyl for the first time, we are excited to announce a new & improved volume of Beta Cessions, featuring 26 demos & rarities from the debut album! Beta Cessions: Demos & Rarities brings together a fan-focused collection of 26 songs, many of which have gone previously unreleased. Such mixes include early demo versions of “Switchback” with never-before-heard lyrics, as well as early demos with alternate arrangements and musical production for “Afraid This Time,” “The Last Firstborn,” “Stay With Me” (Unlikely) and “Uncrowned.” Other unreleased versions of tracks include an ‘electronic-instrumental-mix’ of “Symbiont” and a Karaoke version of “So Sorry To Say” featuring the instrumental version the song, but with backing vocals included.

Beta Cessions: Demos & Rarities delivers on the rarities side as well, bringing full digital/streaming access to previously released but rare tracks, such as the 2001 alternate mixes of “Switchback” (mixed by Ben Grosse) and “Stay With Me” (Unlikely) (mixed by Scott Humphrey & Frank Gryner). The album also includes many of the rare 2000 ‘Detroit’ mixes, including the tracks “Switchback,” “Afraid This Time,” “Under My Feet,” and “So Sorry To Say.” Beta Cessions: Demos & Rarities also delivers the first ever digital release of the 3 original 1999 demos from the Celldweller Limited Edition EP in 2000 along with Klayton’s electronic focused tracks “Kemikal” and “Beginning of The End.”

Another major impact the debut Celldweller album had on a world-wide audience of fans and fellow musicians/producers was the opportunity to publicly remix a number of the songs from the album – spawning over 1,000 remixes over a span of 10+ years following the album’s release. Previously receiving only limited releases through various song-based compilations over the years, the Celldweller / FiXT team is proud to announce an official ‘best-of’ debut remixes 2-volume compilation series releasing to all digital stores in Fall/Winter 2017. Many of these remixes will be making their first appearance on streaming platforms such as Spotify, Apple Music, Deezer and TIDAL.