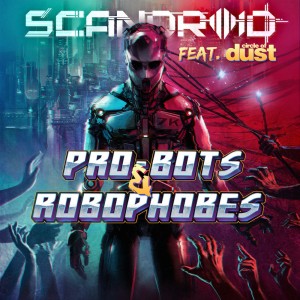 The past and future collide with the collaboration between the futuristic, New Retro project Scandroid and recently resurrected 90’s industrial act Circle of Dust. Bringing the underground intensity and mechanical grittiness of early industrial into a new era and combining it with modern production and a new retro throwback spin, Scandroid producer Red has achieved his goal of bridging timelines and different musical worlds into one powerful parable full of catchy hooks and driving beats.

When asked about the collaboration, Red was quoted as saying “When I heard that Celldweller was bringing back his old project Circle of Dust, I knew we had to collaborate. I sent him a message through the Outland Industries portal, letting him know that Circle of Dust was one of the bands that inspired me to start making music. He immediately agreed to collaborate and we started discussing musical direction, wanting to really bring that old Junk Rhythm sound (Or “industrial” as you say in the 21st century) back from the dead, you know? I sent over a demo of my new track Pro-Bots & Robophobes to see what he would do to it. Circle of Dust added some classic “industrial” sounds, and with Klayton’s modern production, the track kind of brings us all together in a past, present and future kind of way for those of you getting the track in 2016.”