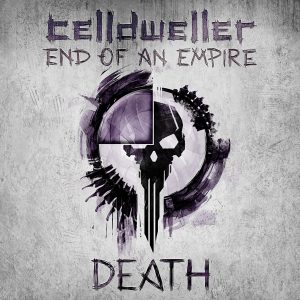 At long last, Celldweller delivers the final chapter of End of an Empire, the highly anticipated “Chapter 04: Death”.

The album opens with unnerving and mysterious sound design, as well as the voice of the haunting Gatekeeper, before throwing you right into the action with “New Elysium,” the psy-trance and metal hybrid that will make you ready to mosh as much as rave. As the vocals, arpeggios and heavy guitar feedback begin to ground you, “Precious One” takes End of an Empire to a place Celldweller has never before ventured with an eerie organ and heavy drum fill that both deliver on the tone set by the chapter’s title – “Death”.

“Death”‘s remixes keep the energy alive from the very first drop with Zardonic’s pulse-pounding take on “New Elysium”. From there, the nomadic Drumcorps glitches “Precious One” nearly beyond the point of recognition with a unique artistry, before The Algorithm turns “New Elysium” up to 11 with epic chugging guitar and otherworldly synth lines. The album ends with the incredible Rhys Fulber (Front Line Assembly, Delerium, Conjure One) and his ethereal and transcendent remix of “Precious One” that takes you all through endless time and leaves you begging for more.

With all four chapters of End of an Empire out, that leaves room for just one last release…. the final album…. Bear witness as all four elements come together for the true end of this empire.