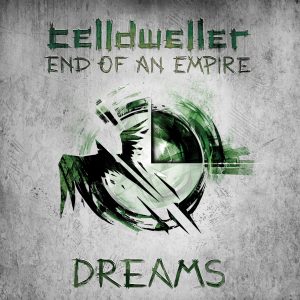 Celldweller makes a magnificent return with “Dreams,” the newest chapter of End of an Empire. Following suit with the previous chapters, Klayton delivers 3 sound design oriented “Factions,” two evocative vocal tracks and four remixes from a wide array of talent.

After the opening Faction in which we hear the voice of the iconic Dreamcatcher, it instantly picks up the speed with “Good L_ck (Yo_’re F_cked),” an octane-fueled industrial-punk rock song that sounds as at home in a futuristic nightclub as it would in an underground rock ’n’ roll concert venue. After you’ve worked out all the aggression of the opening vocal track, “Just Like You” flips End of an Empire on it’s head with equal parts ambience, atmosphere and raw passion as it transfixes listeners with an epic range of emotion. The chapter rounds out its original offerings with two more Factions (one instrumental and one building upon the story of the vast and curious world that End of an Empire has been creating).

The chapter’s four remixes bring out characteristics displayed best in the work of the people behind them. From the electro-industrial intensity of Combichrist to the glitchy and ethereal Hecq, the cinematic Tom Player and the diverse and expansive Mobthrow, each remix stands out in it’s own way to bring something different to the table for Chapter 03 of Celldweller’s most ambitious album to date.