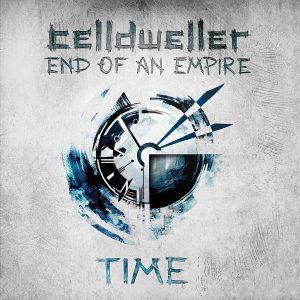 In the triumphant follow-up to the 2012 ‘Wish Upon A Blackstar,’ Celldweller delivers the first glimpse of his 3rd artist album, End of an Empire, with the aptly titled ‘Time’ chapter. Featuring monolithic vocal tracks of epic scope, this release highlights Klayton’s unique fusion of infectious electronic music with aggressive rock & roll the way only Celldweller can – by blurring the lines between organic and synthetic. The title track “End of an Empire” takes listeners on a 7.5 minute dichotic journey of metal-infused drum & bass blasts, and a contrasting mix of lush vocal hooks and aggressive screams. “Lost in Time” clocks in with another 7 minutes of vocoded vocals, driving guitar riffs and pulsing ethereal synths, concluding with the fading lyric “this feeling will never die.”

Klayton then serves up “Factions,” 3 sound-design oriented pieces re-imagined from the title tracks which transport listeners to the world of ‘Atiria’ and beyond. Finally, select tracks have been remixed by a group of titans suitable only for this release, including platinum selling band Breathe Carolina, along with world-renowned producer/ drummer/artist KJ Sawka (Pendulum/Destroid), mastermind glitch/ drum & bass producer Comaduster and FiXT’s own bass-metal monster OCTiV.